The stakes could not be higher. If the GOP tax bill passes, your federal tax dollars will be used to support the private and religious school tuition of any student, no matter how wealthy, in every state.

The tax bills of both the House and Senate would allow wealthy families like the Trumps and the DeVoses to divert up to $10,000 a year in taxable dollars to pay K-12 private school tuition.

What the rich should pay in taxes, will instead pay for elite private and religious school tuition–even to schools that discriminate against students based on race, religion, gender, primary language, disability and LGBTQ status. The wealthy could take advantage of this tax scam before their child is even born.

Tell your representatives to take out the expansion of 529 accounts. Tell them to fully restore the SALT deduction instead. Send your email here. 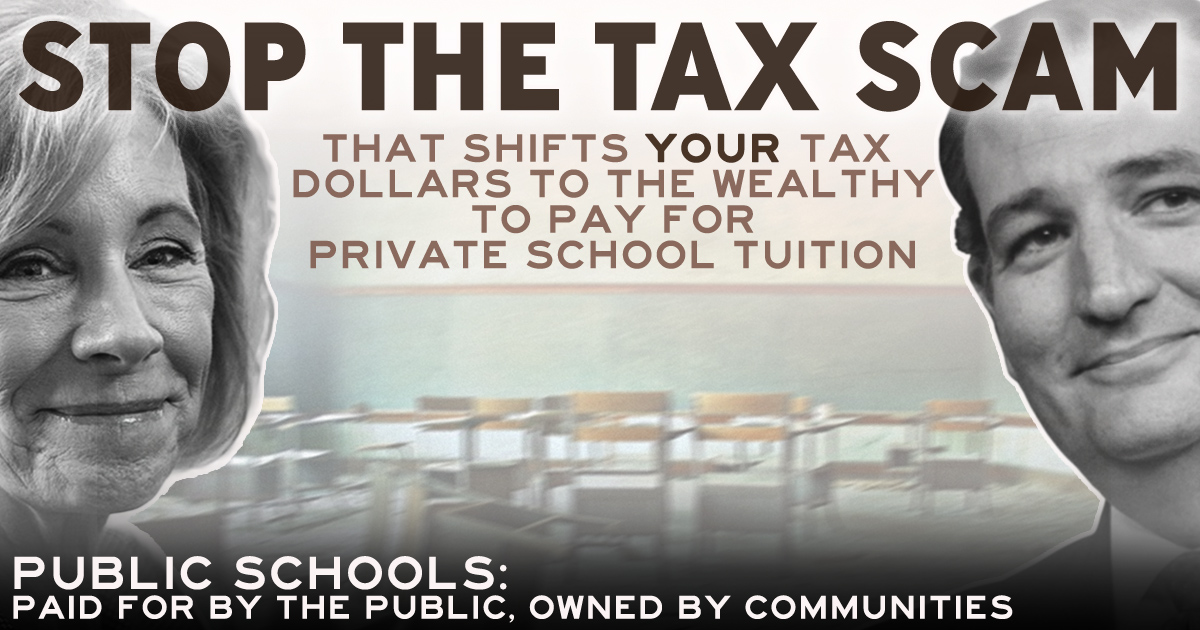 Make no mistake. The ultimate goal of this scam’s proponents (who include Ted Cruz and Betsy DeVos), is a national voucher program. As DeVos recently announced, “We are just getting started.”

The war on education does not end there.

Time is short. Legislators do not want to go home and hear from their constituents, who  oppose these horrible bills. The final bill is being discussed in conference nowand the plan is to push it through before the holiday recess begins on December 18th.

Then make your call. You can find the phone numbers of your Senators here.

You can find the phone number for your House member here.

Keep it simple when calling:

“I am calling to express my opposition to the tax bill. I support public schools and oppose the expansion of 529 accounts for K-12 private school tuition. Restore the SALT deduction instead.”

Fight for democracy. Fight for your public schools. Tell Congress that you do not want your tax dollars going to the wealthy to send their children to private and religious schools.

Thank you for taking action.

Standing Strong for Public Education is a joint project by Opportunity Action and NPE Action.