We endorse Paula Setser-Kissik for the state senate of Kentucky, District 12 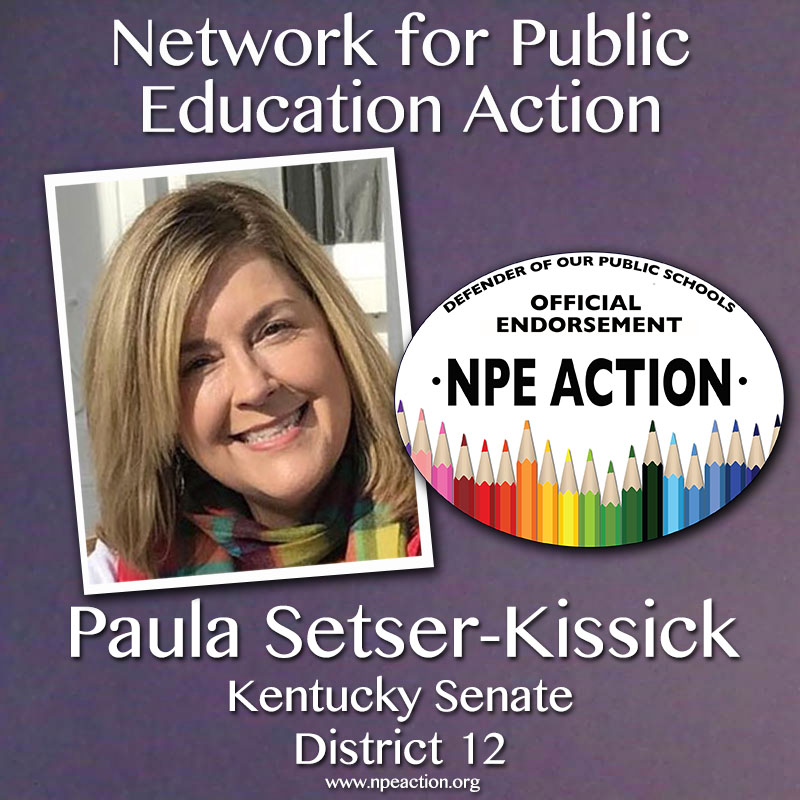 NPE Action is proud to announce that it has endorsed Paula Setser-Kissik for the state senate of Kentucky. Paula is one of three pro-public education, female candidates in that state who we have endorsed.  Paula’s campaign message is as follows:

When we asked her what policy changes she would propose, this is what she said:

I would like to see policies that enforce funding for education and pensions, decrease testing and destructive school competition, and increased options for true public schools (not charters) to be more flexible and innovative to meet the needs of their districts. I’d also like to get rid of Kentucky’s charter law that is due to take effect later this year.

Paula’s viewpoints are well aligned with the positions supported by NPE Action. She is opposed to using test scores to evaluate teachers; she wants to reduce the role of testing in schools; she believes in smaller class sizes and she understands the importance of protecting the rights of teachers.

Paula told us, “Public education provided both sides of my family with a path out of poverty, and both of my parents are retired educators. I’m very passionate about the need for traditional public education in a democratic society.”

And so are we. We hope you support Paula Setser-Kissick when you cast your vote. If she is elected she will represent District 12 of the Kentucky State Senate. The primary election is being held on May 22, 2018. The general election will take place on November 6, 2018.

Pol. adv. by the Network for Public Education Action